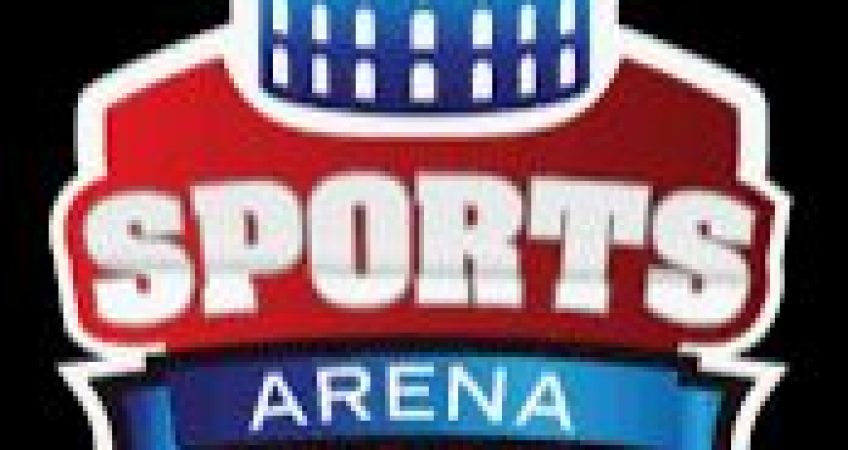 Posted by simon In Uncategorized

SMS BACK TO WINNING WAYS 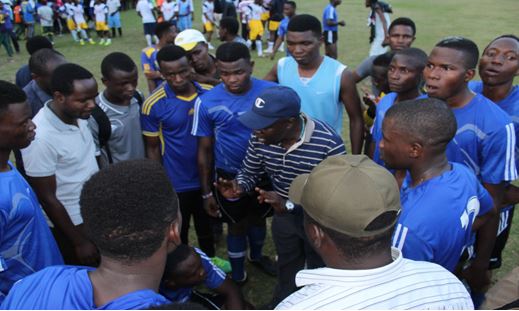 Fr. Andrew at the middle giving instructions to his players. (Photo taken by Frt. E. Tairo)

Spiritan Missionary Seminary team arrived at Kibosho seminary late in the afternoon one hour before the match started and they were received by their host Kibosho seminary, with their cheering squad they changed the atmosphere at Kibosho Seminary and this made the Kibosho team to fall under fear.Before the match begunKibosho Seminary team coachsaid “we are undefeatable” and he had a strongbelief on his brothersthat they can win but the result did go to their way. 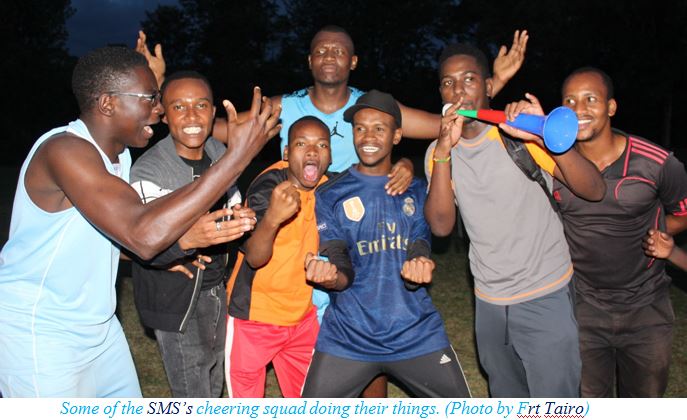 At 4: 15 pm the match started with high pressure from both teams, just in the second minute Kibosho got a lead, and at the fifth minute of the match SMS leveled through Bro. Germinus Marco. At first half Kibosho were seen taking most of the possession and at the 37th minute they got their second goal. This result remained standing up to the end of the first half.

The second half was quite different SMS had to come with another approach of the game and they made one substitute, Pascal Yawaga taking the position of Theothenas Matungwa who came to change the game and luckly enough they got an equalizer at the 49th minute through Julius Wasswa before his position been taken by Dominick Rwehimamu. One of the SMS’s player Ibrahimu Ngassa got an injury which made him to be replaced with Denis Bakata. Up to the 90 minutes the results remained 2-2 and so the match had to go to the extra time and again SMS had to make a technical substitute whereas, Pascal Yawaga was replaced by Criscent Ouma, during the first half of the extra time SMS looked to be dominating most of the game and up to end of first half of extra time the results were still the same. At the beginning of the second half of the extra time SMS were like a lion who has never eaten for ages and they were always on the Kibosho’s final third and their struggle was paid by a goal from the team captain Alphonce Dodi at the 95th minute which made the results to be 3-2 in favor of the SMS. Before the last whistle from the referee, Criscent Ouma utilized a pass from the team captain and made it 4-2.

sms back to winning ways written by Brs. Juvenal Bureta and Alphonce Dodi.

A FAMILY IN BASKETBALL 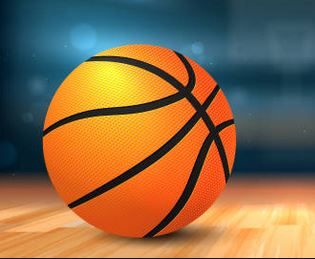 In the universality of sports arena there is a grouping of a lot of differences but, beside it, exist a bonding power or spirit which unite each members of a given team to play and work together on the road to the primary objective of winning (making their best and enjoying) the game.

One famous game in the arena is basketball. Basketball, colloquial referred to as hoops, according to Wikipedia is a team sport in which two teams of most commonly five players, opposing one another on a rectangular court, compete the primary objective of shooting a basketball through the defender’s hoop while preventing the opposing team from shooting through their own hoop.

This sport is an athletic game which put to trial both the emotions and the physical ability of an individual. Basketball is also a family game which teaches his members how to accommodate the behavior of one another without any bias so as to work together toward a particular goal (usually winning a game or competition).

In human society family (from Latin; familia) is a group of people related either by consanguinity (by recognized birth) or affinity (marriage or other relationship). As for basketballer there exists a family constructed by affinity which is a most for success in this arena.

After using the principle of bonding we started a breaking down of an unfruitful record in inter seminaries with our small basketball team, people started asking us the secret of our success, we simple answer them that it is due to our family spirit. But usually most team lack that bonding power needed to build that family, reason which pushes us to question ourselves on;

What is this bonding power all about?

How can we create that bonding power?

And finally how can we build a family using that concept of bonding spirit?

Great sports teams that succeed all have one thing in common that is bonding (team) spirit.As we said “at the beginning the most important item for a team in general and in basketball teams particularly is a good coordination (bonding spirit)”

As one once wit put it, team spirit (bonding power) is when a group of people really feel invested in reaching a goal together and are there to support each other for the achievement of the goal said Fr.      Members of a team will not stay together just because they work together. Lack of bond in a team will lead to more time handling work place drama and politics instead of getting work done.

Team bonding encourages cooperation outside of the office and strengthens collaboration in the workplace (field).Team building helps everyone get to know and trust their fellow coworkers, but trust it is not build overnight. The psychologist Bruce Tuckman describes three stages for building team chemistry that is;

These happen when your team comes together usually by practicing a common pleasing activity such as going for a tripe together. Here we develop self-estimate in every members and a slogan for the group.

This is the stage were by the team become more cooperative. Each member starts appreciating the working stile, habit, ethnic and the role of his fellow. At this junction it is always good to try a scavenger hunt. That is a challenge the team for them to apply what they had learned from each other.

This face involves a personal commitment toward a voluntary service, where every individual participate voluntarily by his small action.

Each team building activity can bring everyone closer together, whether they’re just starting out in the forming stage or at their highest potential in the performing phase. But your team can return to any phase within this team building model, such as when old members leave or new hires join your team. So there is a need to be flexible in team building approachas the team’s life cycle changes.

To build a family with basketballers, everyone have to see his fellow not only as a friend but also as brother feeling which is bounded by honesty, trust, fairness and collective responsibility thus developing respect along the way .

The best from each members should be draw out and help them get to where they want to go. Trying to continue this relationship beyond the game will automatically develop in each member a sense of family wood.

So Basketball is all about teamwork and provides the opportunity to deal with different types of people from different backgrounds and social groups in order to collaborate and foster a great team environment.

Whether you just want to play for fun or on a competitive level, basketball is a great team building sport which is one of the major requirement for a team to succeed and can also be apply in life. That is the major secret behind the success of the Spiritan missionary seminary’s basketball team. As one once wet it “union make force”.

Volleyball, game played by two teams, usually of six players on a side, in which the players use their hands to bat a ball back and forth over a high net, trying to make the ball touch the court within the opponents’ playing area before it can be returned. To prevent this a player on the opposing team bats the ball up and toward a teammate before it touches the court surface that teammate may then volley it back across the net or bat it to a third teammate who volleys it across the net. A team is allowed only three touches of the ball before it must be returned over the net.

A brief history of volleyball

Volleyball was invented in 1895 by William G. Morgan, physical director of the Young Men’s Christian Association (YMCA) in Holyoke, Massachusetts. It was designed as an indoor sport for businessmen who found the new game of basketball too vigorous. Morgan called the sport “mintonette,” until a professor from Springfield College in Massachusetts noted the volleying nature of play and proposed the name of “volleyball.” The original rules were written by Morgan and printed in the first edition of the Official Handbook of the Athletic League of the Young Men’s Christian Associations of North America (1897). The game soon proved to have wide appeal for both sexes in schools, playgrounds, the armed forces, and other organizations in the United States, and it was subsequently introduced to other countries.

Volleyball was introduced into Europe by American troops during World War I, when national organizations were formed. The Fédération Internationale de Volley Ball (FIVB) was organized in Paris in 1947 and moved to Lausanne, Switzerland, in 1984. The USVBA was one of the 13 charter members of the FIVB, whose membership grew to more than 210 member countries by the late 20th century. International volleyball competition began in 1913 with the first Far East Games, in Manila. During the early 1900s and continuing until after World War II, volleyball in Asia was played on a larger court, with a lower net, and nine players on a team. The FIVB-sponsored world volleyball championships led to acceptance of standardized playing rules and officiating. Volleyball became an Olympic sport for both men and women at the 1964 Olympic Games in Tokyo. European championships were long dominated by Czechoslovakian, Hungarian, Polish, Bulgarian, Romanian, and Soviet (later, Russian) teams. At the world and Olympic level, Soviet teams have won more titles, both men and women, than those of any other nation. Their success was attributed to widespread grassroots interest and well organized play and instruction at all levels of skill. A highly publicized Japanese women’s team, Olympic champions in 1964, reflected the interest of private industry in sport. Young women working for the sponsoring company devoted their free time to conditioning, team practice, and competition under expert and demanding coaching. Encouraged by the Japanese Volleyball Association, this women’s team made its mark in international competition, winning the World Championship in 1962, 1966, and 1967, in addition to the 1964 Olympics, At the end of the 20th century, however, the Cuban women’s team dominated both the World Championships and the Olympics. The Pan American Games involving South, Central, and North America added volleyball in 1955, and Brazil, Mexico, Canada, Cuba, and the United States are frequent contenders for top honors. In Asia, China, Japan, and Korea dominate competition. Volleyball, especially beach volleyball, is played in Australia, New Zealand, and throughout the South Pacific. A four year cycle of international volleyball events, recommended by the FIVB, began in 1969 with World Cup championships, to be held in the year following the Olympic Games, the second year is the World Championships, in the third the regional events are held for instance European championships, Asian Games, African Games, Pan American Games, and in the fourth year the Olympic Games.

This has started since the foundation of the seminary where the seminary team has succeeded to participate in different tournaments with little achievements, the game is developing day to day, more skills are  invested which brighten the future of the game,  due to emphasize from sports coordinator many students desire to learn and know more about volleyball.

It is a call of each one of us to admire the game for the betterment of our future as a seminary and for the good health of individuals.

An Article “Sharing in the Queenship of Mary Mother of God”
© 2017 - The Spiritan Missionary Seminary. All right reserved.
wpDiscuz
0
0
Would love your thoughts, please comment.x
()
x
| Reply
X